Enter fluid density to get dynamic and kinematic viscosity from SRV

Introduction to density input for SRV

The Density SRV output can be described as a polynomial of the form:

With this model we can describe a constant density or a temperature dependent density.

The equation above expects temperature in °C. If you have data in °F or °K, then convert temperature to corresponding °C before estimating the coefficients.

Once you have the coefficients (Do0, Do1, ...), you can use any of the methods described below to upload these into the sensor electronics (SMET).

a. From RCP Navigate to the "Service" tab

b. Look for the "Density (SRV Only)" section: (this is only active when you have a SRV sensor connected to RCP)

d. For constant density, edit the value and click "Write".

e. For temperature dependent. Input the coefficients and click "Write".  Ensure Temperature (T) was in °C when estimating the polynomial coefficients.

Over Modbus (either RTU or TCP) there are a set of registers associated with the density input for the SRV sensors.

There are two holding registers associated with each of the Do coefficients of the polynomial.

The  two holding registers of each coefficient should form a float 32 data type in Big Endian format.

The registers are password protected. This is, you should input the user password in the holding register 0 to be able to write to the coefficients.

An example using ModbusPoll software to get constant density: 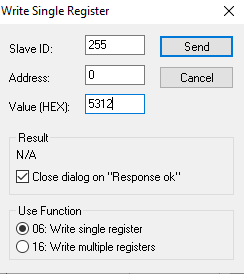 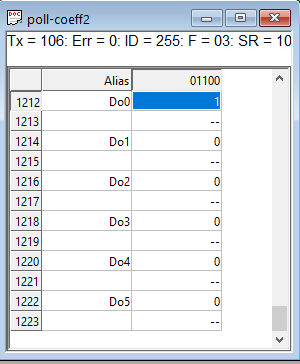 For temperature dependence, Write to the set of coefficients to get the expected behavior, according to the fluid and application. 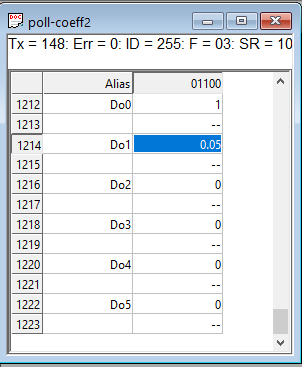 Rheonics support team can help you configure the Density input to SRV for your application. For that, you will get a configuration file that will be valid ONLY for the specific sensor it was created for.

b. Go to "Settings" tab and click on "Expert Mode" 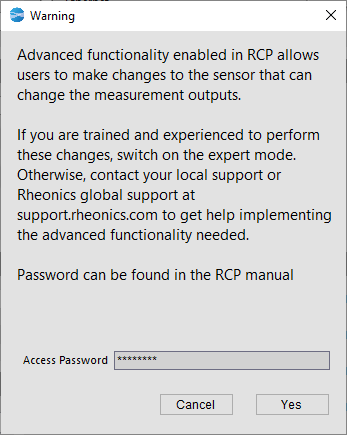 d. Now a new set of buttons will appear or be enabled in the software: 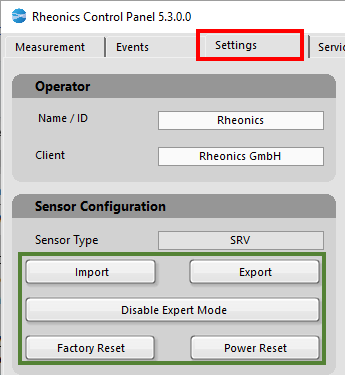 e. Click "Import" button to load the file provided by rheonics support team into the sensor.

f. "Import" button should turn GREEN for a moment if the file was properly loaded. Otherwise it will turn red. If that's the case please, click "Refresh" button and re-attempt loading the file.

g. The "Export" button will automatically triggered. This will generate a configuration file that should be sent back to rheonics team for verification.

h. Click "Refresh" to populate and review the new settings in software.

Since SRV measures a product of Density and Dynamic Viscosity of the fluid, to get the correct Dynamic Viscosity measurement from the SRV, the density should be input following any of the steps described above.

To display and log the viscosity, in RCP Software, go to settings page, and in "Graph Settings" section select "Viscosity" from the dropdown list.

This will display the Dynamic Viscosity value in the Measurements tab and also will be saved when logging the records. (Assuming that the actual density has been input as described in the points above). 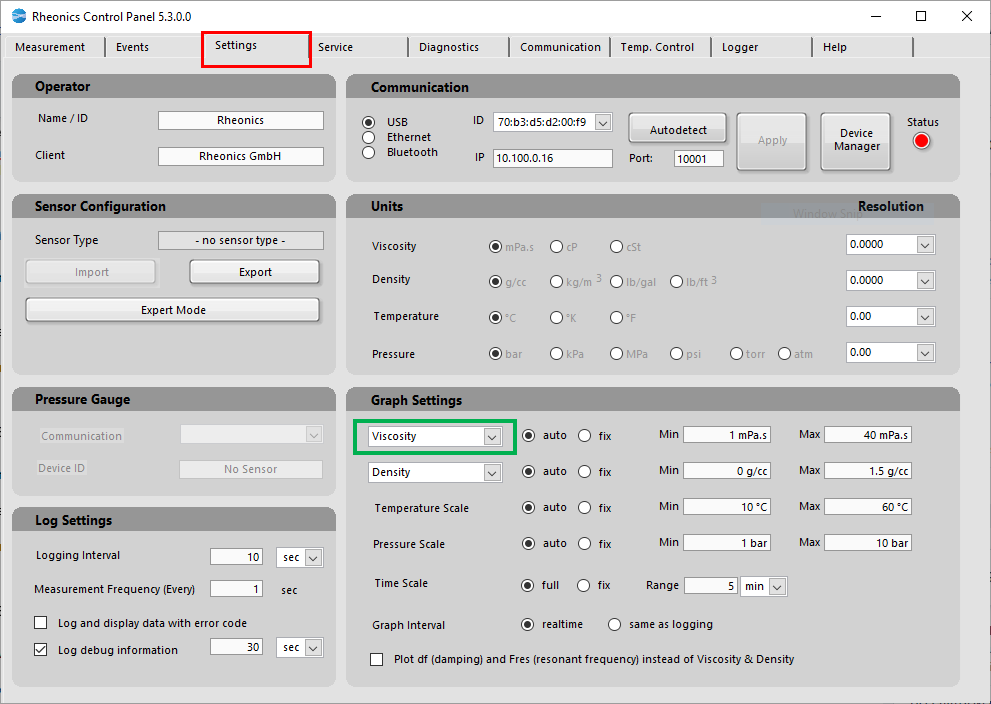 We can access Dynamic Viscosity over Modbus, these are:

a. Median Dynamic Viscosity (5 points by default. Can be modified with filters) - Parameter 1

Last Good holds onto the last valid value of the parameter till a new valid value is generated.

You can access the registers according to the table below.

In RCP Software, go to settings page, and in "Graph Settings" section select "Kin. Visc." from the dropdown list.

This will display the Kinematic Viscosity value in the Measurements tab and also will be saved when logging using RCP. 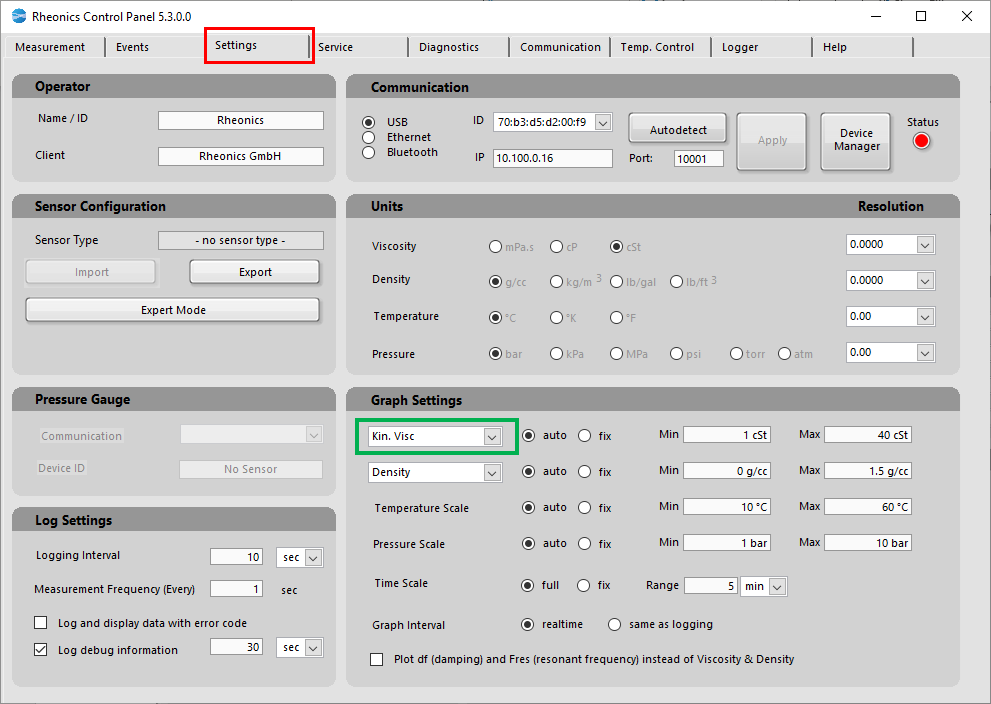 You can access Kinematic Viscosity by reading the input registers associated with parameter 4.

By default SRV Density is set to 1 g/cc. However, as described in steps above, you can change the SRV density. If your measurements are made with the default density, and you want to obtain the kinematic viscosity for those measurements, follow the instructions below.

to calculate the Dynamic Viscosity from the SRV measurement, we can estimate using:

and, to calculate the Kinematic Viscosity from the SRV measurement, we can make:

b. According to the Nippon Grease reference table:

d. Then we can calculate the SRV Kinematic Viscosity by using the Kin. Visc. equation above:

e. According to the table, the expected kinematic viscosity at that temperature, is  26730 mm2/s, that leads to a percentage error of 0.992%. Which is within the rheonics sensors accuracy.

NOTE: if the fluid density at that temperature (0.8825 g/cc) is input, as described in the first section of the document, then SRV will directly output the Dynamic Viscosity value (as well as kinematic viscosity value when selected in either RCP, on the TRD display or over digital channels (Modbus RTU/TCP, Serial over USB, Serial over Ethernet, EthernetIP, etc).

Did you find it helpful? Yes No

Send feedback
Sorry we couldn't be helpful. Help us improve this article with your feedback.